Did you know it could be so hard to find the perfect dog name? Or did you just start looking and are just looking to get inspired? Either way, you have come to the right adres! On 123Tinki.com we have a database of over 40.000 dog names which will definitely contain a beautiful name for your new furry friend! To help you find the right names from the database we have created a tool. Our dog name generator. As it says, it generates dog names. You tell the generator what you prefer and the generator shows you the names that apply to these personal wishes. This way you can find any name you might like. Ranging from Disney dog names to unique dog names to dog names starting with C. Literally anything you can imagine, you can find it here.

Over the years dog names have changed and developed. When humankind first started domesticating dogs, they were probably not giving them names yet. In the beginning dogs were bred and used with a purpose, often for hunting, trailing game, guarding, pulling carriages. Those kind of things. It was only until the beginning of the 20th century that dogs were being bred for the sole purpose of their looks. This is also why there are so many different breeds, each with different looks and qualities. Which automatically leads to different trends as well. Often certain dog names were chosen for specific breeds, and those names stuck. You see it nowadays as well. How many Golden Retrievers there are which are called Marley or Max. Jack Russells called Jack etc.
A few decades ago it was also common to simply call a dog, dog. Now you can name your dog anyway you want to. Really, it does not matter. If you like the name, you should definitely choose it. That is what is most important. After all, you are the owner. She is your dog and you will have to call the name for the rest of her life. Now this might not help you to narrow down your choices so we will give you a few tips on what makes a good name. 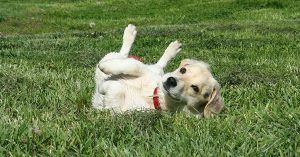 Here is a list of some other beautiful, strong, female dog names. The meaning of the name is written behind. 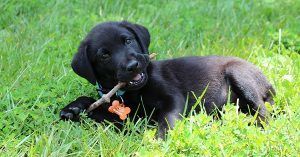 One thing we really want you to remember at all times is to take your time. Really, you do not have to rush this decision. Eventually you want your dog to have a name that you absolutely love. You also want to be able to enjoy the name after a few years still, make sure to remember that. It is completely okay that you take a bit longer, nothing wrong with that! Take your time and find that one absolutely perfect dog name, good luck!

The meaning of a name

To a dog, her name does not mean as much as it does to you. Your dog will not realize that her name is actually her name. She will know that when she hears the name she has to pay attention to you but she will not understand the meaning of the word the way you do. This is not a bad thing, after all dogs will sense really well what you are feeling through hearing their name. So maybe they do not understand the beautiful meaning of their name, they will understand you.

Because to dogs their name is simply a command, it is best to treat the name as a command. Commands are simple, short and clear terms. Because that is what works best for dogs. It is also the first command you want to teach your dog because who needs to sit, stay, roll over or lie down? Exactly, your dog. This is why the name should also be short and clear. To make sure it is there are a few things you can take a look at. These are the length of the name, the sound of the name and complexity of the name.

The length of your dog’s name

A dog name should not be too long, it is best to stick to one or two syllables. This is because a longer name will become confusing. For your dog and for you. You have to be able to pronounce the name clearly and your dog has to be able to understand you at all times. Also in emergency situations or situations in which the surrounding noises are a bit loud. You have to be able to pronounce the name clearly. A longer name will easily be shortened. This is not handy and could be confusing. Calling your dog Napoleon but also Leo will not work. It will be very confusing, especially for a young dog. Decide from the beginning and pick the shorter alternative.

The sound of the name

What is also an important aspect of your dog’s name is the sound of it. Research has shown that some letters work really well, the sound of those letters are processed well by the dog’s brain. For example the letter ‘s’ can be pronounces clear and hard, which is good. So think about this, any letter that you are able to pronounce loud, hard and clear is a good option. Also names ending in ‘ey’ or a similar sound will do well. This makes names like Marley, Casey, Bailey, Max and Timmy very good dog names. Think it through, which letters are you able to pronounce clearly? Create names with those and practice them out loud!

The complexity of the name

When it comes to your dog’s name, do not make it complex. You will only make it harder for yourself and your dog. You will not be able to pronounce the name clearly and your dog will not be able to hear you. You might be able to pronounce the name now but when you find yourself in a situation in which you have to react fast, it might not be so easy. Do not make it too hard on yourself and stick to something simple that you are always able to pronounce. If your puppy is about to run off onto a busy street you want to be able to shout the name in a warning. This is easier done with a short name than a long one. Alexander will easily become Alex when having to shout it in a hurry. Calling your dog Alex one day and Alexander the next will be very confusing. Stick to a simple one from the beginning.

Now that you know a bit about what makes a good dog name, you might also want to read a few examples of powerful female dog names. Through history there have been quite a few extraordinary, courageous dogs. Their loyalty always most persistent. Not all of the examples below are female dogs but do let yourself get inspired by their names and stories!

Laika was a small Russian stray dog from the streets of Moscow. Her story is quite remarkable and you might have heard about it. She was picked up from the streets of Moscow by Sovjet professors, they trained her to go into space. She was trained to stay in confined spaces and live off fluid food. She became the first dog to orbit the earth! Sadly she did not make it, the spacecraft was designed to burn out into space anyway but 3 hours into the ride Laika already passed due to stress and heat. We do think she was a very brave little dog.

The Japanese Akita Hachiko was not a female dog but his story is incredibly remarkable. And well, the name sounds good for a female as well! The Japanese Akita went down in history for his extreme loyalty. Hachiko walked his owner to the train station in Tokyo every day. When his owner returned from work, he was there waiting for him. When Hachiko’s owner passed away, the dog kept waiting at the station. Day in day out, in the same spot. His remarkable loyalty did not go unnoticed by surrounding people. When Hachiko himself passed away, people put up a statue of him in his spot in front of the station. You can still find it there in Tokyo to this day.

Smoky was a small Yorkshire Terrier found by an American soldier in the New Guinea jungle in 1944. She became a WWII mascot after being the soldier’s partner for 2 years. She slept with him in his tent, shared his rations and followed the soldier wherever he went. Smoky survived over 150 air raids and even made it through a typhoon in Okinawa. Later, Smoky was named the Champion Mascot in the Southwest Pacific Area by Yank Down Under magazine. Smoky saved the soldier’s life on multiple occasions, warning him for incoming fire. She became the first therapy dog on record. Are you about to own a Yorkshire Terrier? Smoky would be a lovely, meaningful name!

Find your favorite strong female dog name with a meaning