Find the best dog names with meaning of love

Immediately find your dog names with meaning of love

Finding the best name for your dog is something very important but also really hard. You want the best name, just like every other dog owner, which we understand. That is why we can help you! On 123Tinki.com you can find a dog name generator that can sort out the names for you that you might like. Since we have a database of over 38.000 dog names, a bit of sorting out is not unnecessary! Besides the generator we also have tips for you on how to choose the right dog name and we will of course give you plenty of examples!
Check out different categories as well! For example German dog names, dog names that mean loyal or dog names starting with L.

Examples of dog names with a meaning of love

Here are a few examples of dog names that mean love, let them inspire you! These are all names that literally mean love in a different language. 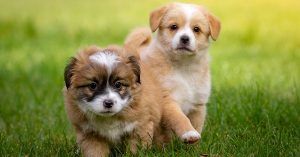 We mentioned it above already, the dog name generator is a very handy tool to help you sort out the names that you prefer. Which is important because going through all the names from our database is not very handy. You can let the generator know what you prefer by selecting different filters. For example select ‘female’, ‘Italian’ and ‘cute’ and the generator will give you a list of all the cute Italian female dog names from our database! 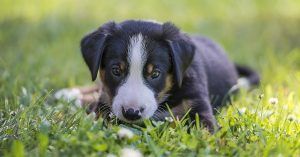 Is there such a thing as the perfect name? Probably not, you’d think. But we think there is! We believe that as long as you, the owner, thinks a name is perfect then it most definitely is. If you are sure the name suits your dog, choose it. You get to decide! To help you find possibly perfect names we have a lot of tips for you. Keep reading to find out what you can do to find your one and only dog name!

A brief history of naming dogs

Giving a dog a name is very normal in our modern western culture. Sadly, not all dogs in the world are given this privilege of a loving home. Only 17 percent of all dogs in this world live with a family, the rest of the estimated number of dogs around the world are strays. Luckily, your new dog will arrive in a loving home and he deserves a beautiful name. Through the years, many dogs have been giving different names. Years ago when dogs were used as working animals, they were sometimes simply called dog. Or dogs were given the same name as the one before them since that was easiest. Nowadays, you can really choose anything you want! Let the following heroic stories about loving and loyal dogs inspire you!

This story is about a small dog that was the first living being to orbit the earth! She was picked up from the streets of Moscow by Sovjet professors. The professors trained Laika to stay in confined spaces and live off fluid food. Eventually, she was shot into space. The spacecraft Laika was in was destined to burn up in space, so Laika was never meant to survive the ride. Years later, research showed that Laika already died 3 hours after launch due to heat and stress.

A beautiful example of unconditional love and loyalty is the story of Japanese Akita Hachiko. Hachiko lived in Tokyo with his owner between 1923 and 1935. Every day, Hachiko and his owner walked to the train station in Tokyo together. His owner left for work and Hachiko waited at the station. Always staying in the same spot, when his owner returned Hachiko was always there. Sadly, Hachiko’s owner passed away before him. Hachiko kept waiting in his spot at the station for his owner and eventually passed away there. A statue was put in the dogs place, you can still find it there at the Shibuya train station to this day.

Another very heroic story is that of the small Yorkshire Terrier Smoky. Smoky was found by a soldier in an abandoned foxhole in New Guinea. The soldier sold her to another soldier called Wynne. Wynne and Smoky became really good friends and survived the Vietnam War together. Smoky even survived a typhoon! Although Smoky was never considered an official war dog so she did not get the needed provisions and medical care during the war. She lived off Wynne’s provisions and for a while even off seaweed! After the war she did receive several battle stars for saving Wynne and fellow soldiers from several incoming missiles.

Another story about a war dog! Nemo was an official war dog that served in the Vietnam war. One night, Nemo and his handler soldier were patrolling when they got attacked by the Viet Cong. Nemo sensed the enemies early and together they were able to rule out two Viet Cong soldiers already. Then, his soldier got shot and fell down, Nemo protected him until backup arrived. Nemo himself got shot in the muzzle but the bullet left through his mouth. Later, Nemo’s right eye had to be removed and he lived out his life on Lackland Air Force Base.

To help you find that one perfect name we have some tips for you. There are a few important things you ought to think of when choosing the right name, we will list them here. These aspects that we will discuss right now are about the length of your dog’s name, the sound of the name, the complexity and about time. Good luck with finding the right name!